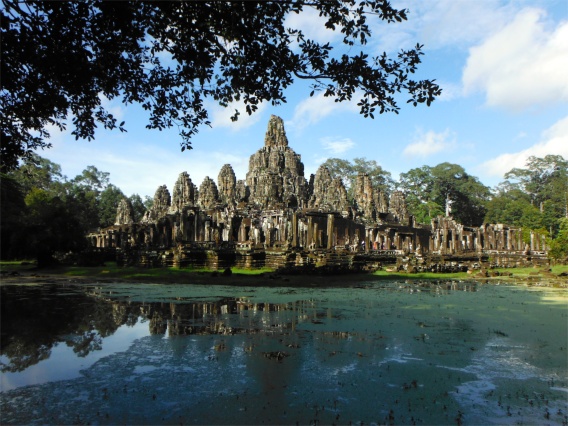 On Saturday, we hired a tuk tuk driver for the day to take us on a ‘small tour’ around the ancient archeological grounds of Angkor where we explored the famous Angkor Wat, Angkor Thom (Bayon Temple, Elephant Terrace, & Royal Palace), and finally Phnom Bakheng for a must-see view of Angkor Wat at dusk.

On Sunday, our tuk tuk driver took us to see Ta Prohm temple, Bantreay Srei temple, Preah Khan, and then we returned to Angkor Wat for our final farewell.

Of all the amazing structures scattered throughout the archeological grounds of Angkor, Angkor Wat is the most famous – and for good reason!  Nearly 1000 years ago, Suryavarman II ordered the rainforest to be carved out to make way for this enormous Hindu temple which was to represent heaven on earth.  The people of Angkor dug out the massive 190m-wide moat enclosing a rectangle measuring 1.5km by 1.3km (making these grounds visible from space)! The temple itself was built with a foundation of latterite stone covered by impressive sandstone carvings along the entire structure including multiple galleries packed with intricate and meaningful bas-reliefs.  This architectural and engineering wonder was built in an astounding 30(ish) years! Pretty impressive.

Although Angkor Wat is the most famous, all the buildings littered throughout the archeological grounds were amazing and unique.  The Bayon temple has multiple towers, each adorned with many faces.  Ta Prohm is a beautiful temple that has been destroyed by a forest of giant silk-cotton trees.  Bantreay Srei is a pretty rose-coloured sandstone temple with incredibly intricate carvings.  And Preah Khan (a former Buddhist university) is an interesting sight of ancient beauty and piles of crumbled structure as it is preserved as an example of how most of Angkor looked upon discovery in the 19th century (before restoration).

We only got to see a fraction of the buildings that are left of the Angkor Empire but we surely could’ve spent over a week exploring every nook and cranny of this fascinating city!

We opted to purchase a guide book rather than a tour guide for a fraction of the price! 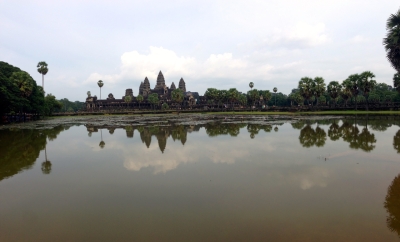 This statue of Vishnu which has been restored many times is thought to have been originally housed in Angkor Wat’s central sanctuary. 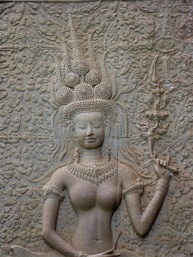 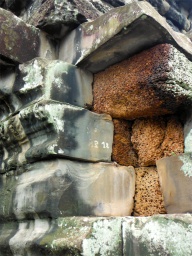 The orange-coloured porous stone is the strong foundation of the temple. Sandstone was used to cover the latterite so that the surface could be made into elaborate carvings.

These extremely steep steps may have been created purposely to simulate the final ascent up a mountain.

We searched through each bas-relief like a treasure hunt to find certain characters as described in our guide book. 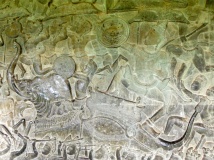 The bas-reliefs are amazing murals of sandstone carvings; this one is 49m and depicts the Hindu epic, the Battle of Kurukshetra. We chose to include the photo of this one to illustrate the depth and detail of these ancient carvings. The carvings would not have been shiny originally but over time they have changed colour and adopted a shine from so many people running their hands along them. 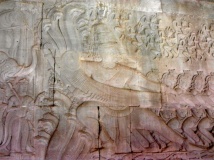 This particular bas-relief is quite famous and depicts the Hindu myth of the Churning of the Sea of Milk. By pulling alternately on the body of a naga (mythical snake-like creature with 7 heads) which is coiled around a mountain, the gods and the demons rotate the mountain for 1000 years churning the sea of milk and creating the elixir of immortality. This seems to be a commonly depicted story throughout the grounds of Angkor. All of the banisters of the major temples are made up of the gods/demons lined up and pulling on the naga.

Notice below the gods’ feet are creatures of the Sea of Milk being mixed around. 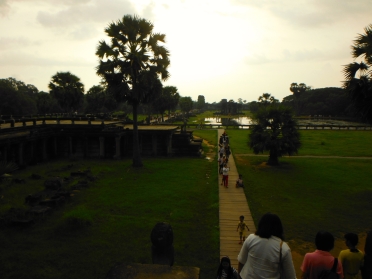 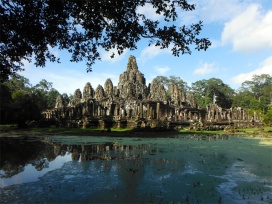 This temple has 37 towers, most of which have at least 4 faces carved on them facing all 4 directions. 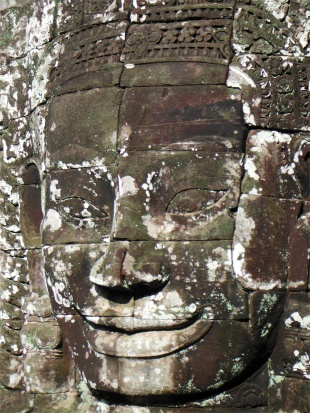 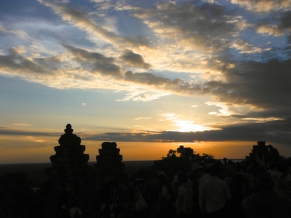 All the tourists are shuttled to Phnom Bakheng for sunset because it supposedly provides the best view of Angkor Wat and it’s surrounding and hence makes for fantastic photo opportunities. 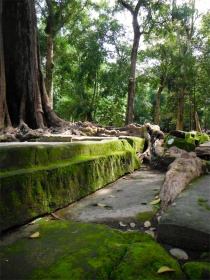 These amazing plants take hold in the temple’s crevices, extend their roots down into the soil, in doing so, the roots work their way between the masonry, hence as they grow thicker, they gradually wedge open the blocks. Eventually the tree becomes a support for the building but when it dies, the loosened blocks collapse. In this way, the trees are agents of destruction for these beautiful ancient structures. 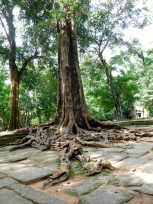 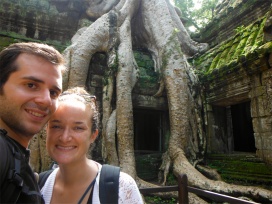 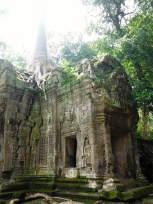 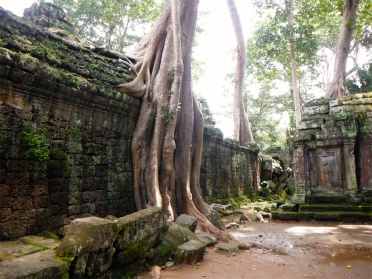 This small but beautiful temple is unique for its rose-coloured sandstone and its intricate carvings.

Adam is standing next to the banister’s naga to illustrate how massive these structures really are! 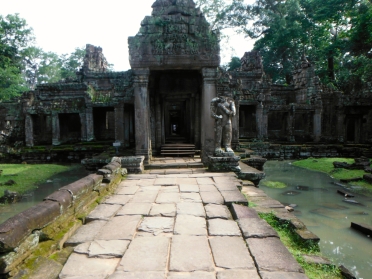 3 thoughts on “Exploring the Ancient Grounds of Angkor”