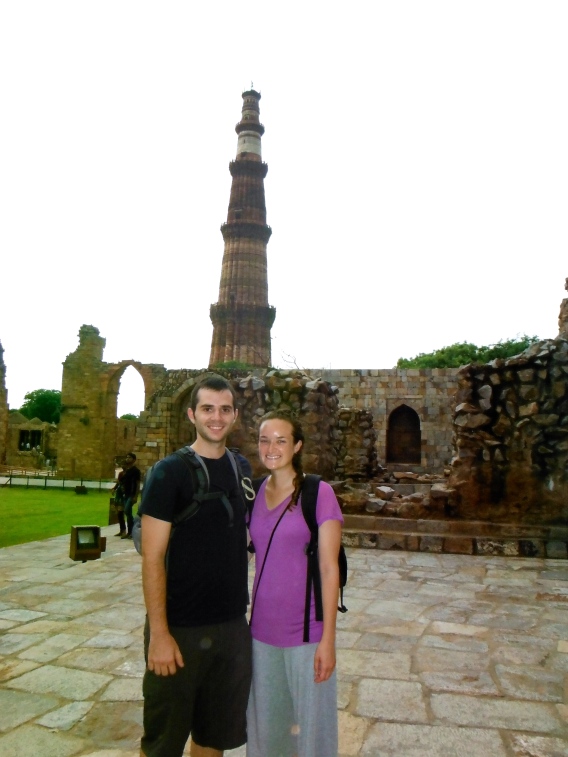 Today we visited the Qutb Complex which we discovered to be the home of our cover photo  for our blog – the Qutb Minar!  The Qutb Complex is a collection of monuments and buildings, among them one of the most famous is the Qutb Minar which was originally build for the first Sultan of Delhi.  The complex was once full of Hindu and Jain temples but now only the ruins of these buildings are standing today.  The remaining architecture of these buildings is beautiful and detailed and the gardens surrounding the monuments are attractive and well-kept.

We were enjoying ourselves roaming around the gardens when a ‘kind’ security guard offered to take our photo with the Qutb Minar…. We handed him the camera and he began a personal little photoshoot of us with different backgrounds and poses – the first couple photos were fun and we just played along thinking he was maybe just bored with his job… but then they continued and we thought to ourselves ‘hmmm I wonder how much this personal photographer is going to cost us…’  Luckily by the time our smiles were becoming less and less genuine, my camera miraculously broke!  The security guard handed me the camera to fix it and we grabbed it and promptly escaped him while he trailed behind asking for his ‘tip’.  The photos turned out great so we’re thinking this guy had some experience with this whole ‘friendly photographer’ scam!  So it worked out for us in the end but a lesson learned nonetheless; looks like you guys will be seeing only long-arm photos from us from here on in!

After shaking off our photographer friend, we continued to the other end of the gardens were we were approached by a small group of Indian women asking to take a photograph with them.  We were quite skeptical about their motive but they didn’t leave us much choice in the matter as they crowded around us and began snapping shots…. we escaped this unscathed but the next thing we knew, there were children running from across the gardens to get photos with us – like we were a couple of celebrities!  We thought it was an elaborate pick-pocketing scam until we realized that perhaps these kids were genuinely excited to have their photo taken with a white couple… I guess they don’t really see many around… at least not many who are willing to strike a pose in a picture with them.

It was an eventful afternoon but we made it back home safely with a couple more Delhi survival tips to add to our growing list.  What an exciting adventure thus far!! 🙂 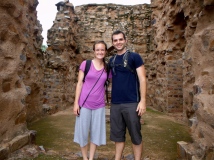 Brave birds are perched at the tip of this crumbling arch.

2 thoughts on “The Qutb Complex”